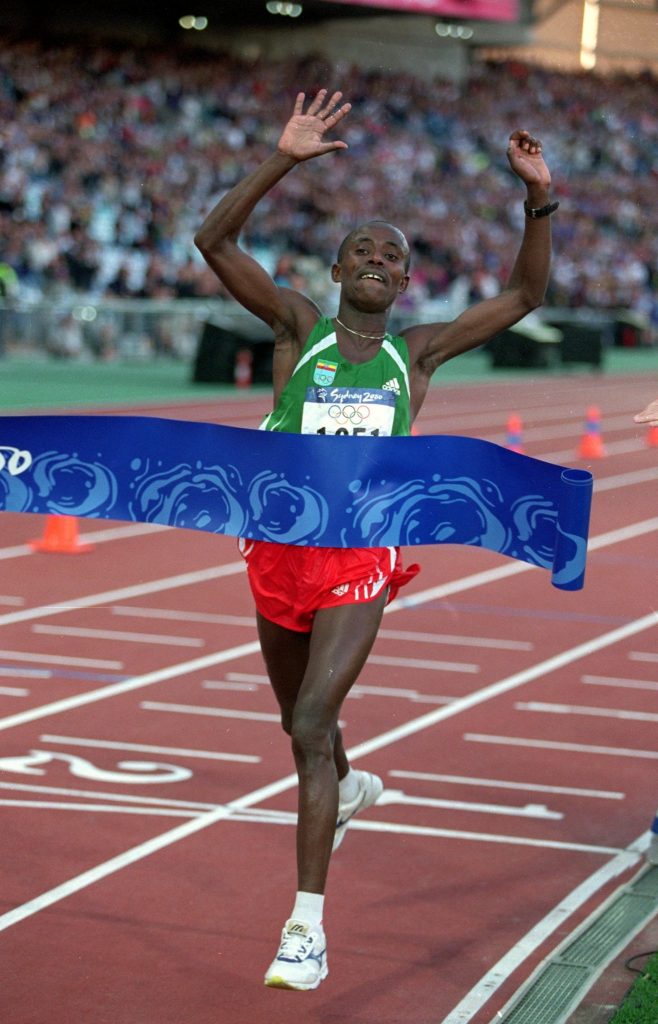 “I had never run just to participate; I always ran for victory.”

After the women´s marathon, which finished with victory for the Japanese Naoko Takahashi, next in line was the men´s marathon, scheduled for the last day of the 2000 Sydney´s Olympics, October 1st at 16.00.

Never so many runners had been at the start: 100 athletes from 65 different countries! And the battle ahead didn´t look easy. Six of the top eight participants from Atlanta 1996 were there, among them the three medallists: Josia Thugwane (South Africa), Lee Bong-Ju (South Korea) and Eric Wainaina (Kenya). And there was also the reigning world champion, Abel Antón, from Spain.

Gezahegne Abera was born in Etya, in the Arsi province of Ethiopia, the same region than famous Haile Gebrselassie and many other Ethiopian champions. As a child, he had to run 25k every day to go to school while also working in his family´s farm, and all this at 2500 metres of altitude! He first competed in cross-country, where he was noticed and offered a place in the national junior track squad, moving to Addis.

In 1998 he debuted in the marathon, finishing 3rd in the first Abebe Bikila Memorial Marathon in Addis. Thanks to this result he was selected for the 1999 Los Angeles Marathon, where he finished 4th (2.13.59), qualifying for the World Championships in Seville. There he only finished 11th (2.16.42), but later that same year he won in Fukuoka with a great time of 2.07.54. Already in 2000, he finished second in the Boston Marathon, arriving to Sydney as one of the youngest and most promising competitors.

Once the Olympic marathon started Tiyapo Maso from Bostwana took the lead, and he was going to be there for a long time. He crossed the 10k in 29.58, and the 20k mark in 1.00.46. It was a windy day, and many of the runners were saving energy tucked into packs.

Maso´s strategy proved wrong, and shortly after the 24 kilometres he was surpassed by a group of four runners that soon turned into three, Ethiopian Abera accompanied by his team mate Tesfaye Tola, with Wainaina from Kenya, who was eager to improve his third position in Atlanta 1996.

Wainaina knew that the Ethiopians had much in their advantage working as a team, so he tried his luck several times. Nearing the finish of the race his effort paid him off, as he was able to leave Tola behind after the 40k, but soon after Abera surpassed him, taking an unsurmountable lead as he entered alone into the Olympic Stadium.

Thus, Abera won the Olympic gold medal in 2.10.11, getting the 4th Ethiopian victory in the event, following a long tradition that had started with Abebe Bikila in Rome 1960. But he also became the youngest Olympic champion in marathon.

Finally, Wainaina got the silver medal with 2.10.31, improving his bronze from Atlanta 1996, although victory escaped him once again. The bronze would be for Tola (2.11.10), showing the rising dominance of African nations in the marathon distance at international level.

We could highlight the 6th position of the Spanish Martin FIz, who had been 4th in Atlanta 1996. It was the last chance of Olympic glory for him and a whole set of European athletes from his generation, among them his teammate Abel Anton (Spain and World Champion twice), and Portuguese runners Antonio Pinto and Domingos Castro. A new wave of African runners had arrived, and they were here for the long haul.

Our winner Gezahegne Abera became world champion in 2001 achieving for the first time an Olympics-World Championships marathon double. He won again in Fukuoka in 2001 and 2002, and also the 2003 London Marathon. Soon after injuries plagued him and although he qualified for the 2004 Olympics in Athens, he didn’t compete. His wife Elfenesh Alemu, also a marathoner, finished fourth in the women’s marathon in Athens 2004.

Regarding the other two medallist, Wainaina would try his luck for a third time in Athens 2004, where he finished in a meritorious 7th place, while Tola had a long marathon running career, that spanned until 2013, whose best result was in the World Championships of Edmonton 2001, where he finished in 4th position.

And we finish here our visit to the marathon in Sydney 2000.

Our next entrance of the series will be focused on Athens 2004, and the victories of Mizuki Noguchi (Japan) in women and Stefano Baldini (Italy) in men.