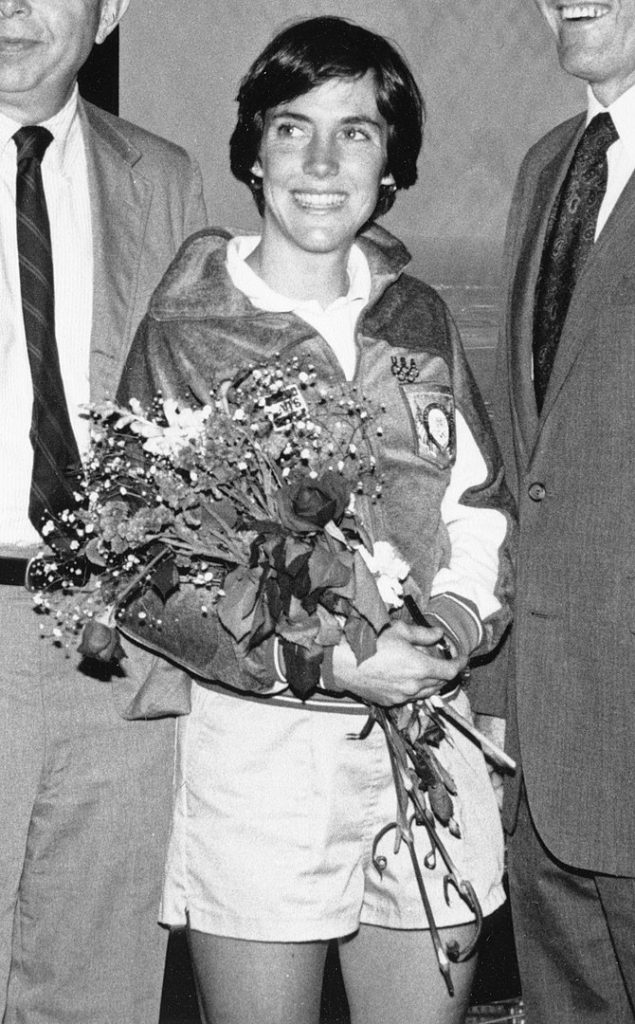 “There’s not a better feeling than when you have found that moment of balance and harmony when both running and life come together. Then you know why you run and that you couldn’t live without it.”

A lot did happen before women could compete in the Olympic marathon. Much was thanks to German coach and physician Ernst van Aaken, who in the last 60s already encouraged women to long distance running while trying to convince governing bodies of organising women´s championships and women-only races. He organised the first women marathon championships in his hometown, Waldniel, in West Germany. Victory was for Christa Kofferschläger in 2.59.25. 00The United States followed suit organising their first championships one year later, with victory for Judy Ikenberry in 2.55.18.

With scientific data proving that women were as capable of running a marathon than men, women marathoners and performances improved dramatically. By 1979 the world record stood in 2.27.32 (Grete Waitz), when the 3 hours barrier was still unbroken by 1970. The Boston marathon was the first to allow women to enter and wear official race numbers in 1972. The victory was for Nina Kuscsik in 3.10.26, although she had already run “unofficially” the three previous editions. Many more women-only marathons appeared in the calendar.

Nevertheless, it wasn’t until February 1982 that the IOC members decided that the women Olympic marathon would take place. Before Olympics women marathon debuted in the European Championships of 1982 in Athens, with victory for the Portuguese Rosa Mota in 2.36.04.

Los Angeles hosted the Olympics for a second time, after having done so in 1932. Because of the boycott from the United States to Moscow 1980, 14 Eastern Bloc countries didn´t participate in Los Angeles 1984, including the Soviet Union and East Germany. In athletics Carl Lewis got 4 gold medals equalling what Jesse Owens did in Berlin 1936. Among women Nawal El Moutawakel became the first Muslim African woman to win an Olympic medal, after his victory in the inaugural 400m hurdles.

Joan Benoit was born in Cape Elizabeth, Maine, in the United States. In college she was not very good in athletics. Her first marathon was in 1979, by chance, after registering for a marathon as a “long run” the day after winning a 10k race. She easily finished second and decided to try her luck in the Boston Marathon two months later, that she won. Her marathon career had started. She won a few more marathons and set a world record (2.22.43) in Boston in 1983 before classifying for the 1984 Olympics.

The Olympic marathon would start on the track of the Santa Monica City College to finish in the Olympic Stadium. The course was quite hilly, especially in the first eight and last ten kilometres sections. It was scheduled for August 5th, the same day than the men, at 8.00.

49 women from 28 countries were present for the inaugural marathon race. Besides Benoit most of the big names were running: from Norway Ingrid Kristiansen, with the European record (2.24.26), and Grete Waitz, with five consecutive victories in the New York marathon 1979-83; British Joyce Smith, already 46 and winner of Tokyo 1979-80 and London 1981-82; and Rosa Mota, from Portugal, European champion and winner of the Chicago marathon in 1983.

During the uphill first kilometres the course obliged for a slow pace, crossing the 5k in 18.15. When it turned downhill pace fastened, arriving to the 10k (35.24) with Benoit leading, only 5s ahead of Kristiansen. Many runners were still shortly behind.

Getting to the 20k (1.08.32) Benoit´s lead was already 72s over Mota, who was herself 12s ahead of Kristiansen and Italian Laura Fogli. Things were turning good for Benoit, as her advantage only increased as kilometres went by. By the 30k (1.42.23) she was almost 2 minutes ahead of a group with Mota, Kristiansen and Waitz.

With temperature on the rise and the course getting to an exposed roadway the pace slowed for everyone. Arriving to the 40k Benoit was still 87s ahead of Waitz. Victory was almost hers. Thus, Benoit crossed the finish line to become the first Olympic marathon winner in 2.24.52, with the whole stadium recognising such achievement. Second place was for Waitz (2.26.18) and third for Mota (2.26.57), both unable to close the distance with the powerful Benoit.

Benoit´s winning time was better than the time achieved by male winners in 13 Olympic marathons!

After the Olympics Benoit got married and won in Boston again in 1985. Injuries prevented her for competing again in the Olympics of 1988 and 1992, although she has continued competing in the marathon distance with great success. In master category she has won in world class marathons while setting a long series of records. Her last achievement was in 2019, when in order to celebrate the 40th anniversary of her first victory in the Boston Marathon she managed to finish in 3.04.00, at 61 and accompanied by her daughter.

She has never retired from a marathon race.

In our next entry we will tell what happened in the men marathon.

A video with highlights of the marathon in: