“More than being first,

hero is who knows to give everything, 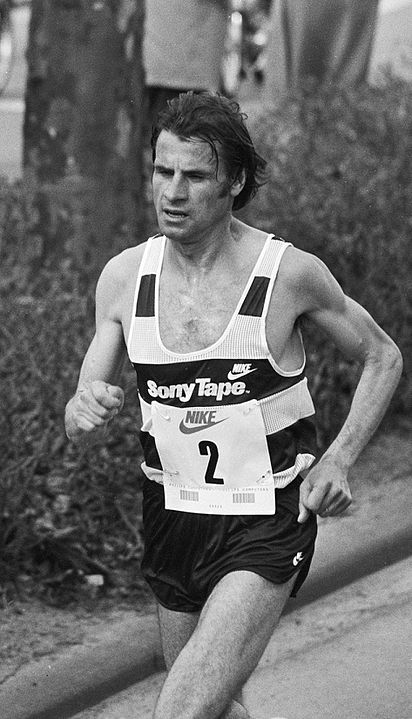 Los Angeles was chosen as host for the Olympics for a second time, after having organised them also in 1932. The only other candidate for 1984 was Tehran, which withdrew itself after the Iranian Revolution. Strangely to the usual over costs of organising such events, these Olympics were a management example: low construction costs and private funding allowed a 250 million dollars profit. The old 1932 Los Angeles Memorial Coliseum was refurbished for using it as the Olympic Stadium again, and college campus were used instead of building an Olympic Village.

Because of the boycott from the United States to Moscow 1980, 14 Eastern Bloc countries wouldn´t participate in Los Angeles 1984, including the Soviet Union and East Germany. Only the former Yugoslavia and Romania though decided to participate, with the latest finishing second in the medal list, only behind the United States that topped the rankings for the first time since 1968.

In athletics Carl Lewis got 4 gold medals equalling what Jesse Owens did in Berlin 1936. Sebastian Coe, from the UK became the first athlete to win the 1500m races twice, while Nawal El Moutawakel became the first Muslim African woman to win an Olympic medal, after his victory in the inaugural 400m hurdles.

The marathon would start on the track of the Santa Monica City College and finish in the Olympic Stadium. The course was quite hilly, especially in the first eight kilometres, mostly uphill, and again, although more gradually in the last ten.

With quality marathons on the rise there were more choices for countries to select their Olympic teams. Some countries such as United States and Japan still had Olympic trials, while others chose the pre-Olympic marathon taking place in Los Angeles as the trial race.

Waldemar Cierpinski, winner in the last two Olympics was missing because of the Soviet Union boycott, but most of the fastest marathoners were present. Alberto Salazar from the United States was the world-record holder. Rob de Castella from Australia was the reigning world champion, and unbeaten in a marathon in four years. There was also a powerful Japanese team (Toshihiko Seko and the twin brothers Shigeru and Takeshi Soh) and many top African athletes feared for their racing: front running from the start, in a “win all-lose all” strategy.

Carlos Alberto de Sousa Lopes was born in Vildemoinhos, near Viseu, Portugal, in a humble family. Since very young he worked to help his family. He liked football but found by chance that he was good at running. At 16 was third in the Junior Cross-Country National Championships and signed by the athletics team of the Sporting Clube de Portugal, in Lisbon, to train under the guidance of Martin Moniz Pereira.

He participated without success in the Olympics of Munich in 1972, although it wasn’t until 1976 when he started achieving success, by winning the World Cross-Country Championships. In the Olympics of Montreal 1976 he won a silver medal in the 10000 metres, only behind the great Lasse Virén. After these Olympics Lopes didn´t come to prominence again until 1982 (he wasn´t able to qualify for Moscow 1980) by breaking the European record in the 10000 metres. By the end of that year he decided to prove the marathon distance in New York. Although he didn´t finish, Lopes found that he could compete at the top in the marathon distance.

One year later Lopes finished second in the Rotterdam marathon, and the following year, with the Olympics in sight, he was able to revalidate his cross-country world title and run the second fastest 10000 metres in history, by helping his teammate Fernando Mamede to break the world record in the distance. He was luckily unhurt after a car run over him in Lisbon only one week before the Olympics. Despite this he was ready for Los Angeles 1984 marathon, his third Olympic appearance.

The marathon was scheduled for August 5th at 17.00. Women had already competed in the morning, with Joan Benoit becoming the first female Olympic winner. Temperature was 23°C in the shade of a dry desert environment, and a course mostly exposed to the sunshine. 107 athletes were in the start line representing 59 countries: the most global Olympic marathon till then.

As expected, African athletes took the initial lead. The 10k (31.09) was crossed first by Ahmed Ismail, from Somalia, a short distance ahead of the favourites. Just before the 20k the Japanese Takeshi Soh decided to test the field, crossing it in 1.01.20, with a 6s gap over Lopes, Joseph Nzau (Kenya) and Gidamis Shahanga (Tanzania), followed closely by two big groups. Nothing was clear yet, besides Salazar failure, as he had fallen well behind the top places.

The 2.09 marathon pace was fast: only a few runners had been able to run faster before. Despite this, by the 30k (1.33.02) up to 12 runners were still within a 2s range: Never victory had been so close for so many! By the 35k the lead group was only a trio, with Lopes, John Treacy (Ireland) and Charles Spedding (UK). Reaching the 37k was now or never: Lopes increased his pace length opening a gap with the remaining two runners at the front, and they couldn´t follow it! His 5k split from 30 to 35k had been 15.21, but only 14.33 from the 35 to 40k!

Lopes entered the stadium track and claimed victory in 2.09.21, a new Olympic record. The other two front runners were still 200 metres behind, with the silver medal going finally to the Irish Treacy (2.09.56), who surpassed Spedding (2.09.58) already in the stadium track.

Lopes was the oldest gold medallist in Los Angeles 1984 (and still the oldest in the Olympic marathon), and the only runner with Steve Mimoun to win in the same year the Olympic marathon and the World Cross-Country Championships. Back in Portugal he was received as a national hero, although he carried on with his usual training. His marathon career was not over yet. In 1985, back in Rotterdam for its marathon, he stopped the clock in 2.07.12 setting a world-record that would stand for three years. It was though the last marathon he finished. A series of injuries ended prematurely his running career in 1985.

A video with end of the marathon in: