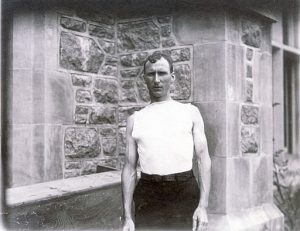 International situation because of the Russo-Japanese War prevented some of the top athletes coming from abroad to compete in St. Louis. Therefore, less than 20% of the total participants came from outside the USA, with only 15 nations represented. Again, as it had already happened in Paris four years before, the Olympics took place along the International Exhibition.

The marathon organizer was James Edward Sullivan. Among the participants the most experienced were the American runners, some of them, as it was the case of Thomas Hicks, had already completed the Boston Marathon. There were also ten Greeks that had never run a marathon before, and the first two black Africans to compete in the Olympics, two Tswana tribesmen that were in St. Louis for the sideshow fair, a series of controversial sporting events under the “Anthropology Days” running title, where indigenous populations competed in some weird athletic feats, for the disapproval of Pierre de Coubertin. Also, there was a Cuban former mailman, Félix Carvajal, that had raised the money for the Olympics running the length of Cuba, but lost everything in a dice game and only arrived at St. Louis hitchhiking and dressed in street shoes and long trousers.

On August 30th, around 3pm and 32°C, the 32 runners that have gathered for the race were off for a 24.85 miles course, in dusty roads opened to the traffic, and including seven hills with ascents between 100 and 300 feet. To make things more “interesting” Sullivan had decided that 2 water stations, at miles 6 and 12 should be enough. He wanted to do some research on the effects of dehydration, as it was a captivating research topic at the time, and he thought that an Olympic marathon was the appropriate venue to get this information.

The American Fred Lorz took an early lead, but it was Thomas Hicks who took the leadership soon after. The Cuban Carvajal, still in a good position, ate some rotten apples from an orchard and started suffering stomach cramps, so he decided to stop for a while and have a nap. For his part Lorz also started having cramps, so around the mile 9he got in one of the accompanying automobiles for 11 miles, when feeling better decided to start running again, entering the first into the stadium, and “finishing” the marathon in just under 3 hours. Just when he was about to receive his medal as winner people realised that he wasn´t the legal winner. He changed his mind and stepped down, saying that it was “only a joke”.

Meanwhile, when Thomas Hicks was 7 miles away from the finish line, and feeling already tired, his supporting crew gave him a mixture of strychnine and egg whites. The strychnine in small doses is a stimulant, and this sadly became the first reported use of doping in modern Olympics, although at the time there were no such regulations. Limping and pale because of the drug running through his system, the news about Lorz disqualification gave him the energy to start trotting again. His crew thought that it was time for a new dosage of strychnine and egg whites, although this time also accompanied with brandy. It didn´t improve things much, until he soaked his head in water, when he somehow started feeling better. He entered the last 2 miles of the race running mechanically and with hallucinations (as he thought that the finish line was still 20 miles ahead). A last shot of brandy on the last mile was enough to let him cross the finish line on the arms of his trainers, while barely able to move his legs. Enough to be declared the winner. He had lost 8 pounds, mainly through dehydration, and needed medical care to leave the stadium. A higher dosage of strychnine would have been fatal. Accompanying him in the podium were his teammates Corey (although born in France) and Newton. Carvajal only managed to finish 4th, and from the 32 runners that started the race, only 14 finished.

The following year Lorz and Hicks would meet again at the Boston marathon, where Lorz would take his revenge and win the race without any illegal tricks. As for Hicks, although continued competing for a few years, was unable to repeat his success in St Louis. Later he moved to Canada to work on mining claims, and naturalized Canadian, settling there until his death.

Pictures in the public domain used under Creative Commons Licence