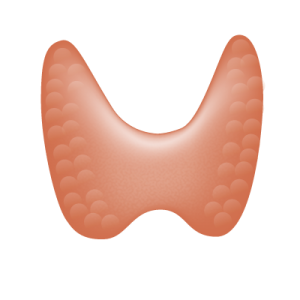 The thyroid is a gland, about 2-inches long, in the shape of a butterfly, and located in the throat, below the Adam´s apple. Being a gland it releases hormones that helps the body use energy, stay warm and keep the brain, heart, muscles, and other organs working.

The thyroid gland uses the iodine in the food to produce thyroxin, also called T4 (because it has four iodine molecules), and in smaller quantities T3, although the latest is mainly produced from T4 breakdown. Their production is regulated by the variation in the levels of another hormone, TSH (Thyroid-Stimulating Hormone), secreted by the pituitary gland.

Thyroid is a finely regulated mechanism, and any changes in its normal function can evolve into pathological estates, mainly because of its over activation (hyperthyroidism) o underactivity (hypothyroidism). If we focus in the hypothyroidism, the thyroid gland is unable to release enough hormone to keep body running normally. Main causes are autoimmune disease (Hashimoto’s thyroiditis), surgical removal of the thyroid or radiation treatment, although iodine deficiency is the main cause in the developed world.

Although many symptoms are variable and nonspecific, we could highlight some typical of a slowing in the body functions, such as feeling colder, tiring more easily, skin getting drier or becoming forgetful and depressed. It is like a motor not getting enough fuel to work. Some of these symptoms are present in people with normally working thyroids, so it can be difficult to determine if there is a thyroid problem present. The thyroid needs to be told by the pituitary gland of how much T4 produce. It the pituitary gland cells detect low levels of circulating T4 in the blood they will increase TSH production to tell the thyroid gland to produce more T4.  The only way of knowing if the thyroid gland is working properly would be a blood test to measure the levels of TSH and T4.

The combination of high TSH levels and low T4 levels would indicate hypothyroidism. If the levels of T4 are normal, but TSH is in the range indicated above (between 4 and 10mU/L), we would be talking of subclinical hypothyroidism. For this mild level of dysfunction there is no treatment recommended, although it will probably develop into hypothyroidism later in life. Usually is prescribed to repeat blood analysis once a year to keep a close eye on further changes. As for the clinical hypothyroidism is treated with T4 replacement, in levels that usually needs a fine tuning to adjust the right amount, not too low (as the body would still be hypothyroid) or too high (as it would go to hyperthyroidism, with symptoms as anxiety, hyperactivity, hot sensations, weak muscles…). 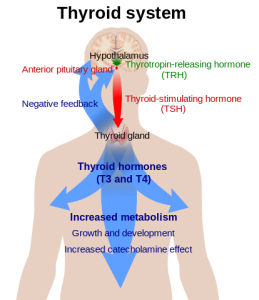 In the next entry we will focus on the effects of thyroid on physical performance.