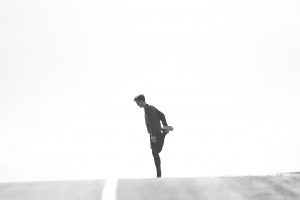 A gland so important because of its effects on metabolism has not been extensively studied in its relationship with athletics performance.  Within normal range an increased thyroid activity correlates with a greater effectiveness of exercising muscles. As the exercise intensifies, TSH levels increase, for an initial and transient increase of T3 levels that leads to a latter increase of T4 levels. For situations of hypothyroidism, when the ability of the thyroid to increase T4 levels is compromised, athletes complained of decreases in athletic performance or exercise capacity (not excluding other symptoms already described).

Seen as the thyroid gland can adjust metabolism, synthetic thyroxine has been used (or more properly “abused”) by bodybuilders and athletes, as an activator, a procedure that could lead to adverse effects, typical of hyperthyroidism, and even myocardial infarction.

It is also worth commenting on the effects that anabolic steroids may have on the thyroid profile, because of its increasing use in athletics, and with aesthetics interests. There have been studies where steroids use resulted in the reduction of T3 and T4 levels. Therefore, some of the improving effects that a cheater athlete could be trying to achieve, would be however countered because of the side effects affecting the thyroid.

About thyroid hormones levels studied after a marathon it was found an increase in the TSH just after finishing the race. This increase was temporary, with normal levels one hour later, and a decrease one day after. As for the free T4 levels, they were significantly increased, for every time recorder, after the race.

Some elite athletes have been diagnosed with thyroid problems, mainly hypothyroidism, with the shadow of suspicion on their performances as they could be using an enhancement in their thyroid profile to achieve better results. Regarding genre, women are four times more likely to suffer hypothyroidism than men, although the reasons for this prevalence is unknown. Among the best-known women in athletics, Paula Radcliffe, was herself diagnosed, not with hypothyroidism, but with an overactive thyroid gland. It has also been said that very intense training over long periods of time could be down-regulating the thyroid, but it is unclear.

As pointed out early in the entry, the link between athletics performance and thyroid profile is not fully understood, and more studies would be welcome to clarify this interesting topic.

If you feel for a long time without energy, your training plans become harder to follow, and your achievements can´t get where they used to be, maybe it´s time to get a blood test and check for your thyroid hormones. Even at a subclinical level, could be explaining a performance decay, and although it doesn´t usually need treatment in these mild states, it would be appropriate to do a blood test annually to prevent any further decays.

A good guide for a hypothyroid athlete would be:

Listening to your body may go a long way, and even if your best times are gone, there are plenty of goals to look for and enjoy running.