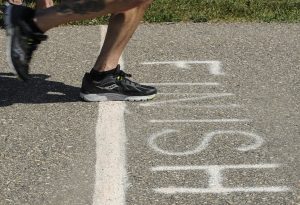 I came across an interesting new review about ultra-marathon running from a physiological and pathophysiological point of view, and I thought it would be interesting to outline some of the main findings of this study.

For those that consider the marathon the bare minimum of competition, the ultra-marathon can become the goal to go for. The number of ultra-marathon races has been progressively increasing over the years, and usually they are organized over a certain distance (50k, 100k or longer) or time (12h, 24h, or even days). The study found that although the number of finishers increased over the years, the best times didn´t improve much, probably because the races have become more affordable to everyday runners, and not only to the very experienced ones as it could happen before.

This study found that male running ultra-marathons are around 45 years old, and that they still account for around 80% of finishers when comparing with women (in the article they even specify more these profiles). If comparing with marathoners, ultras are older and run more slowly. Usually they are already experienced marathoners, that decide to transition to longer distances. They also tend to be thinner, as the training mileage increases accordingly with the race length. Peak performances are achieved older as the distances increase.

From a pathological perspective, the rate of injuries and competition related problems increase proportionally with distance. Nevertheless, when comparing ultra-marathoners with general population they are healthier (less prone to cancer, diabetes, coronary diseases, etc), and with a healthier lifestyle, although the incidence of asthma and allergies is usually higher. Their motivation moves from competition to adventure.

Regarding performance in ultra-marathon, the factors that affected positively the outcome were low body fat and fast running speed during training, with experience also being a key factor, as it was pacing. Experienced runners could maintain the pace with small variations through the race, while younger and less experienced runners tended to start faster, and achieve worst overall performances.

As for the energetic requirements in these races, runners were usually unable to maintain the energetic balance due to an insufficient intake, and sometimes dealing also with a loss of appetite and digestive problems. Additionally, there is a change in the proportion of energy that is coming from carbohydrates, and the body turns preferentially towards the fat as energy substrate.

Musculoskeletal problems are more frequent as distances increase, as could be expected, being mainly located in knees for road races, and ankle for the trail ones. The appearance of blisters depended strongly on the experience of the runner. It was also described a thickening of the tendons and a favorable effect on the cartilage, as the synthesis of collagen was increased. Skeletal muscle damage is extensive after an ultra-marathon, with significant reduction of skeletal muscle mass. Some supplements, as BCAA (that will have a separate post soon) were tried with no effect, as it happened with anti-inflammatory drugs (diclofenac or ibuprofen), while the results were contradictory when consuming diets rich in antioxidants. Surely the best way to reduce skeletal muscle damage is appropriate training.

Cholesterol and triglycerides were reduced after a 24h race. The digestive problems are also one of the main reasons to abandon an ultra-marathon, with 90% of retired runners complaining of nauseas. It looks that the best way to avoid these problems is eating what you like, and trying high-fat foods that seems to be best tolerated. Liver and kidneys usually present elevated levels of damage markers, usually reversible after a few days and rarely serious.

It is concluded that competing in ultra-marathons is overall beneficial, mainly because of the associated training that is implied within, and although there are side effects, that can appear during and/or after race completion, they are usually temporary, and the long-term effects positive.

Physiology and pathophysiology in ultra-marathon running