The story of Ramiro Matamoros, known as the “king of popular races”. 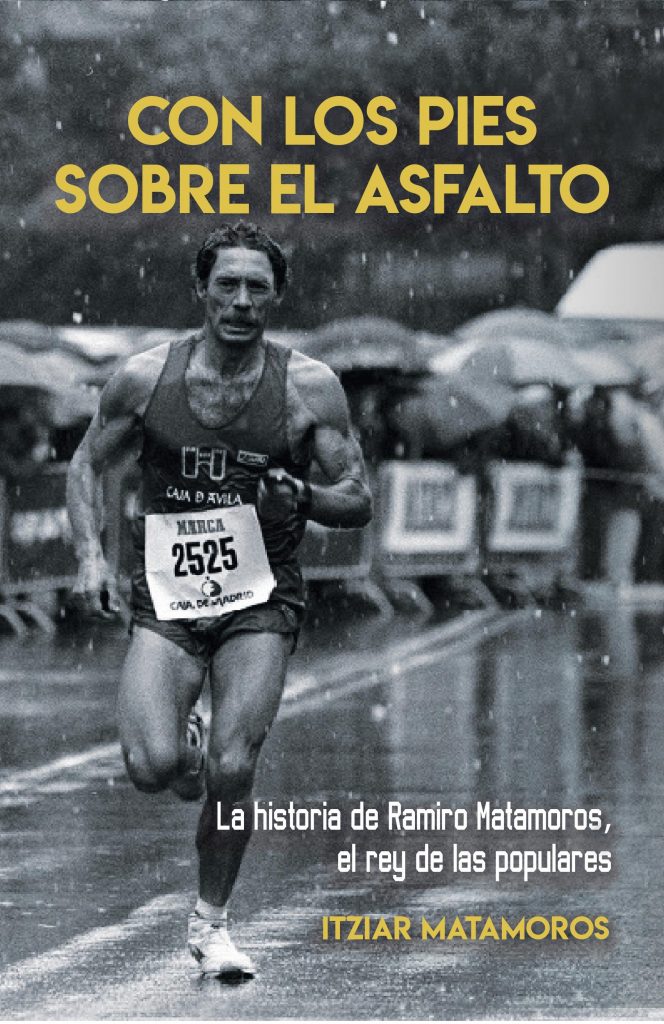 As added to the title itself, we have a biography of the runner Ramiro Matamoros, written by his own daughter Itziar, journalist and writer.

It is a very easy to read book, written from a close distance. It surely contributes that his own daughter writes it. Hence the number of funny anecdotes that populate its pages. On the other hand, the fast and direct style contributes to making it a “quick” book that can be read almost in one go. In addition, it is structured in 42 kilometres/chapters in a nod to the marathon distance.

Summarizing, the book tells us who Ramiro Matamoros is. For whom is not familiar with his name, he was one of the best Spanish runners for more than two decades: from the late 70s until well into the 90s. His multiple victories gave him the nickname of “king of popular races”.

For Spanish runners around 50 years old, his name was a constant in the media. However, for those of us who are a little younger and who did not get to compete in “their time”, this book brings us closer to one of the most interesting characters in the Spanish running world. As in so many places, “the running boom” changed running from an activity for a minority to a “mass sport”.

Ramiro Matamoros was born in a small village in Ávila, Navarrevisca, in 1957. We follow his footsteps as a child until he moves to Madrid for working reasons. He started running by chance, and without counting on the means of other athletes who were exclusively dedicated to running, he began to compete with great success, while combining his work as a snack’s deliveryman for a well-known brand. Hence comes another of his nicknames as “king of the potato chips.”

Throughout the book we follow his sporting and family steps, accompanied by his inseparable wife Begoña, and numerous family and friends throughout the country and beyond.

Among his most outstanding achievements he won the San Silvestre Vallecana Popular in its first edition, in 1978, competing the next day in the San Silvestre for elite athletes, where he finished among the top 20. He won this race on 6 other occasions, the last time in 1994.

In the marathon distance, he won the 1985 Valencia Marathon in debut in the distance, and the 1986 Madrid Popular Marathon (he was also second in 1994). In turn, he participated also in the Chicago and New York marathons.

However, injuries impeded him greater successes. These in combination with long working hours, without following adequate food and rest, that other athletes without such demanding work requirements could afford, possibly deprived us of who could have been one of the best Spanish athletes in history. To have an idea his best times were:

He had a highly competitive level, although after his injury he left, suddenly and without warning, to stop being part of the group of the best.

The book introduces us to other well-known and successful athletes and friends of him, such as Fabián Roncero or Abel Antón, among many others. They give also some valuable opinions.

Once the injuries separated him from racing, he found his motivation, once again unexpectedly, in two projects linked to athletics: the Athletic Club of Alcobendas (later on San Sebastián de los Reyes)/Clínica Menorca, and the group Correr en Rosa (Run in Pink), to bring sports practice closer to breast and ovarian cancer patients.

In short, a highly recommended book to understand how amateur athletics and life was, and in which many runners of a certain age can see themselves reflected. And not least, also the portrait of a mythical figure in the Spanish popular scene: Ramiro Matamoros, the “king of popular races” and the “king of potato chips”.

We finish with one of the last sentences of the book:

“He doesn’t know if he has been a good athlete, but what he sure did achieve was being a person who lived true to his personality. Not thinking about what they will say, but looking at all costs for his happiness and of those around him”.

To find more information about the book and the author: