”It was an unbelievable sensation, because Panathinaiko is the story of the marathon.” 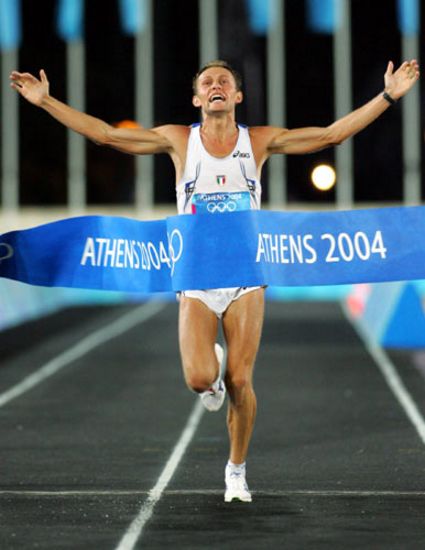 Once again, the men´s marathon would mark the end of the Summer Olympics, on August 29, 2004. As with the women´s event the marathon was following the route from the 1896 Olympics, starting on the site of the Battle of Marathon and finishing in the Panathenaic Stadium, in Athens.

Luckily for the guys, weather conditions were milder than one week earlier, when the ladies endured temperatures above 35°C for the victory of Japanese Mizuki Noguchi. The 101 runners in the start line knew what to expect.

But the field was one of the strongest ever: 14 men have broken 2.08 and another 14 the 2.09! Among them competing for Kenya was the World Record holder Paul Tergat (2.04.55). Besides them, the powerful teams, with 3 runners each and PBs below 2.08 were Spain (Julio Rey, Antonio Peña y José Ríos) and Japan (Tomoaki Kunichika, Shigeru Aburaya and Toshinari Suwa).

Regarding Baldini, he was born in Castelnovo di Sotto, in a large family of 11 children. He run since early, specializing in the 5000 and 10000 metres. Debuted in the marathon distance in 1995 in Venice, where he finished 6th in 2.11.01. Nevertheless, he kept running the 5000 and 10000 metres, representing Italy in the Olympics of Atlanta 1996, although with no success. In 1997 he focused on the marathon, finishing 3rd in NY and 2nd in London, becoming European Champion one year later. He run the marathon in Sidney 2000, although he did not finish. His luck was better in the World Marathon Championships, where he finished 3rd in 2001 and 2003. He was experienced enough to try his luck once again in Athens.

The race starts with Khalid El Boumlili of Morrocco running away. His lead is 10s in the first mile. With a personal best of 2.10.49, no one worries about him and gets back to the pack shortly after the second mile. Everyone seems to be saving energy. The 10k is crossed in 31.54, with Vanderlei de Lima (Brasil), José Ríos and Gang Han (China) in the front, and other 60 runners within 9s.

At a relatively easy pace the pack keeps mostly together. Only the South African Hendrick Ramaala tries his luck, gaining a lead of 20s, although he is caught before the 20k. It is crossed in 1.03.54 with de Lima in the lead, who starts to build up distance. His lead is 12s at the half marathon point, with a big pack of 30 runners behind.

De Lima´s attack start removing rivals from the pack. His lead is 35s at the 25k and 46s at the 30k (1.35.03). Despite the efforts of the pursuing pack the distance only increases.

With no much distance left Baldini, Tergat and Keflezighi (US) leave the pack and increase the pace chasing De Lima. The race seems down to four runners, with Tergat maybe the most dangerous contender.

Getting to the 35k the unexpected: a bystander grapples De Lima. Thanks to the efforts of a spectators he is quickly released, but losing a precious time and what is worse, his pace and focus. Meanwhile, in the pursuing trio, Tergat starts falling back.

With 3 kilometres to go Baldini leaves Keflezighi and surpasses De Lima, reaching the 40k (2.04.49), with 10s over Keflizighi and 18s ahead of De Lima, who has fallen to third. Baldini looks strong and a step over his rivals.

What would have been the results without the incident involving de Lima? Nobody knows, although he didn´t complain and was happy with his result. His sportsmanship was awarded with a Pierre de Coubertin medal, a special honour for his fair play and Olympic values.

Regarding Baldini, he was European Champion in Gothenburg in 2006, and was back to the Olympic Marathon in Beijing 2008, where he finished 12th. That would be his last marathon.

On the personal side we had the chance to run once with him, in the 2001 Madrid Millenium Marathon, which he won (2.09.59), in a race organised to say goodbye to the legendary Spanish marathoners Martin Fiz and Abel Antón.

Next, we will focus on the marathon Olympic Champions of Beijing 2008.