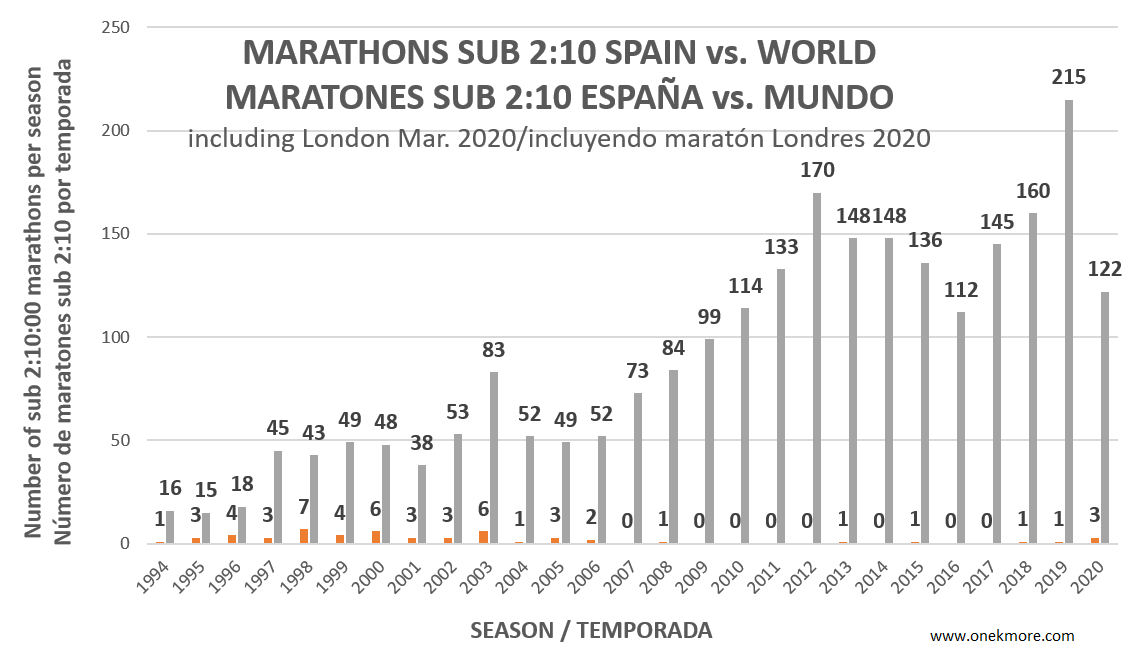 After Sidney 2000 there would still be good Spanish marathoners, but in smaller numbers. Between 2001 and 2006, marks below 2.10.00 were still regularly achieved, while the differences between the best Spanish and world times remained close, between 2.5 minutes and 44 seconds.

During this period deserve a special mention Antonio Peña (Mallorca 1970) and Julio Rey (Toledo 1972). Between them got most of the Spanish news about the marathon, regularly running below 2.10 (13 times between the two). As the culmination of this period Rey managed to lower the national record to an incredible 2.06.52 in Hamburg in 2006. 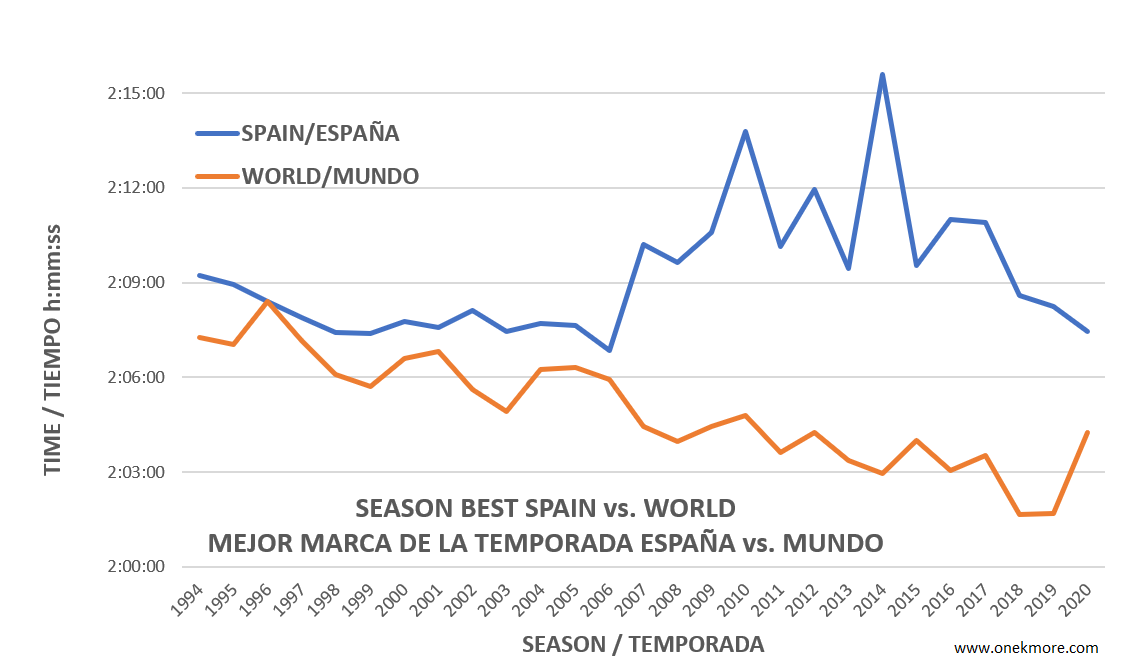 From 2007 onwards the world marathon scene improved rapidly. If up to that moment there were an average of 50 marathons under 2.10 a year, this number went up to 170 in 2012.

However, this increase in quality at global level was not accompanied at the national level. If in the period between 1994 and 2006 the 2h10m had been lowered on 46 occasions, in the period of the same duration that goes from 2007 to 2019 it was only possible to run so fast on 5 occasions (see image). 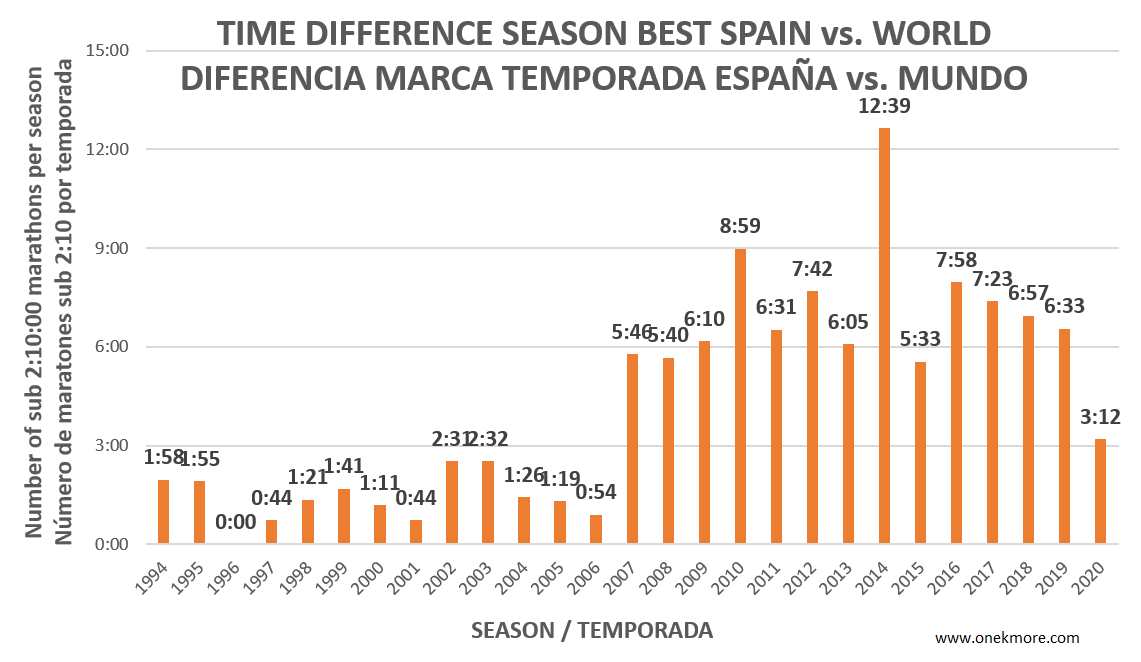 Since the introduction of carbon plate shoes, mainly the Nike Zoom Vaporfly that were introduced in 2017, many runners have improved their times significantly. Variations of this model were present in the last record of Eliud Kipchoge (Berlin 2018), and in the Ineos challenge, where “unofficially” Kipchoge lowered the 2 hours in the distance for the first time.

In this 2020 marked by the pandemic up to 3 Spanish marathoners have managed to run faster than 2h10m, all of them in the Seville marathon. There, the most prominent figure in the Spanish marathon in recent years, Javier Guerra (Segovia 1983), managed to stop the clock at 2.07.27, the best marathon Spanish time in the last 15 years. Worthy to mention the other two athletes who run also fast in Seville, the promising Hamid Ben Daoud (Ksat Oukhit, Morocco 1996) and Iván Fernández (Álava 1988).

We can argue that not all is the effect of these, or other carbon plate shoes recently launched. However, looking at the same Seville marathon, in 2019 only 7 athletes run faster than 2h10m, while in 2020, where Nike shoes had already become widely available the number of athletes who lowered this time was 19 (see image).

As for the Spanish marathoners, none of them were present at the recent London Marathon, where as many as 11 athletes run faster than 2.10. We may guess that some of them will be present at the Valencia elite-only marathon, that will take place in early December.

It remains to be seen if in a scenario where running below 2.05.00 is not enough guarantee for the final victory, Spanish athletes manage to run successfully and maybe shine once again at international level. 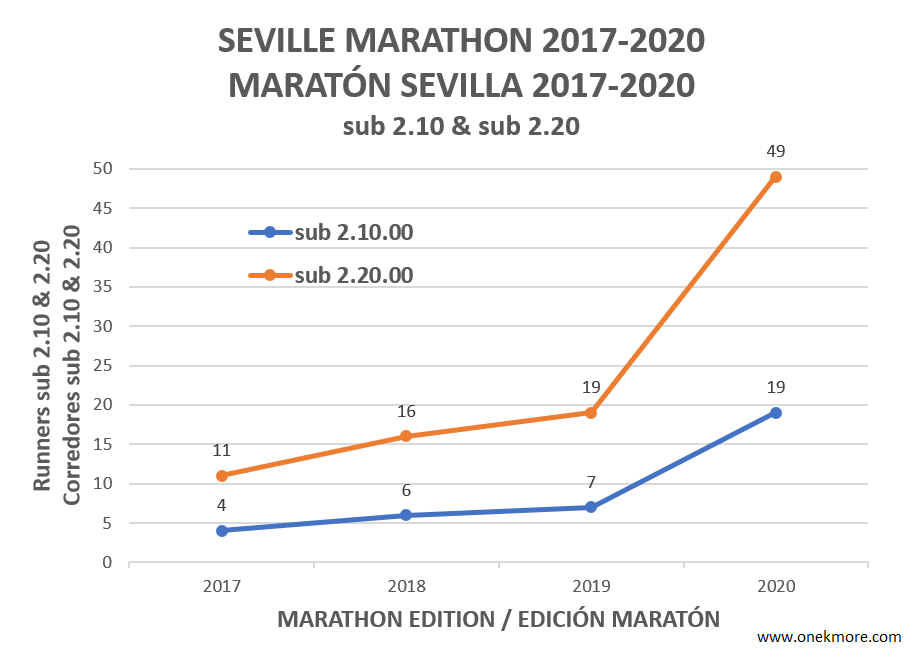