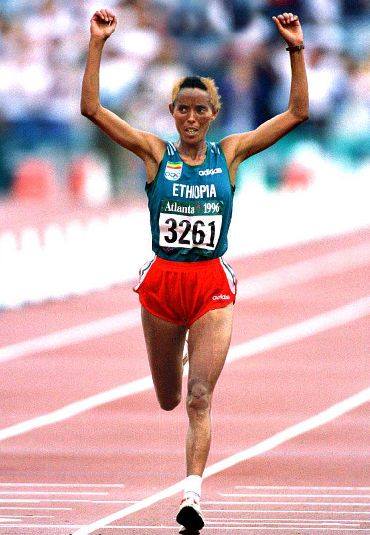 Atlanta was selected over Athens, Belgrade, Manchester, Melbourne, and Toronto to host the Summer Games of 1996. Athens seemed the right candidate, as these Olympics marked the centennial of the inaugural 1896 in Athens. Despite being favourite during the first voting rounds, finally Atlanta won the bid, and gave the United States its fourth Olympics.

24 countries appeared for the first time in these Olympics, including eleven former Soviet republics. Strangely enough, these Games turned a profit thanks to the record revenues obtained through private funding. Although it didn´t go without criticism for being overly marketed, as the Head of the IOC Juan Antonio Samaranch pointed out.

In women athletics Marie-José Pérec won the rare 200 and 400 metres double. As for the marathon it was going to be a tough race, due to the summertime heat, humidity and numerous hills. Thus, the course was 31% uphill, 33% downhill and only 36% flat.

Spain was able to send a full team, formed by Ana Isabel Alonso, who had obtained the national record (still valid) the year before with 2.26.51, Mónica Pont (2.27.53) and Rocío Ríos (2.28.20). Other strong nations were Japan, which team included Yunko Asari, world champion in 1995, and the team for the USA. Also, to consider the gold medallist in Barcelona 1992, Russian competitor Valentina Yegorova, and among the African nations Kenya had Tegla Loroupe while Ethiopia was sending Fatuma Roba. Nevertheless, many more nations had strong candidates for the victory. The women´s marathon was ripe and the level of competitiveness harder than ever before.

Fatuma Roba was born in Bekoji, Ethiopia, one of seven children in a farming family. As many others the best way to get from one place to another and to get to school was running. With Abebe Bikila as his greatest hero she joined the police force after finishing the school. She debuted in the marathon in Addis Ababa in 1993. Being 19 she managed to win in 2.44.20. Invited to run the marathon in Paris the following year she improved her PB (2.35.25) and finished 11th. Qualified for the 1995 World Championships she only finished 19th in 2.39.27. But Roba decided to keep with the marathon distance. Averaging 125 miles per week, mostly at high altitude, managed to ensure victories in 1996 in the marathons of Marrakech and Rome, breaking the 2.30.00 barrier and ensuring her place in the Olympic marathon of Atlanta 1996. She was only 22.

The marathon was scheduled on Sunday July 28th at 7.05. Atlanta was still empty and 88 runners ready to go. Europe was the best represented continent with half of the athletes. Temperature was 21⁰C. It was foggy and with 93% humidity.

As soon as the race started, Uta Pippig, from Germany, took the lead. She started opening a gap with the other contenders, so when crossing the 10k (34.09) was 28s ahead of a pack of five that included Yegorova, Roba, Lidia Simon (Romania), Dörre-Heinig (Germany) and Manuela Machado (Portugal).

As it happens often in marathons, early leaders are unable to keep their advantage. At 17k Roba managed to overpass Pippig, and by the 20k (1.08.45) she was 6s ahead of her previous pack, now including the Japanese Yuko Arimori, with Pippig falling back.

By the 30k Roba had opened a wider gap. Crossing in 1.42.57 she had an advantage of 61s with a group including Arimori, Yegorova, Simon and Machado. As runners got to the latter stages Roba´s pace seemed unreachable for her closer opponents, now running in a single file.

Rocío Ríos, coming from behind, managed to recover 2 positions in the last 2k to finish 5th with 2.30.50, ensuring the best position ever for a Spanish female marathoner in the Olympics.

Fatuma Roba continued her marathon career winning three consecutive Boston marathons in 1997, 1998 and 1999. She attended the World Championships of 1999 in Seville, getting a 4th place. Again, competing in the Olympics, she got a 9th place at Sydney 2000. She improved her PB up to 2.23.21 and continued running marathons with consistency at the highest level until 2004.