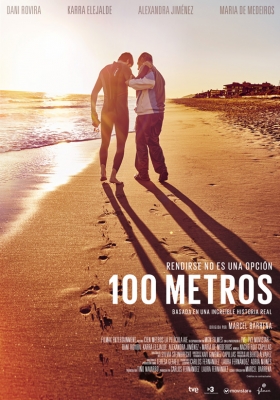 “We are all going to die, so we must enjoy life, not frivolously as an empty carpe diem, but grabbing every instant”.

A Spanish movie based on real events, specifically the story of Ramón Arroyo, who was diagnosed with multiple sclerosis when he was 35 and managed to overcome his limitations and finish an Ironman.

We find our lead happily married, with a kid and his wife pregnant with their second child. He has a successful career as publicist but starts feeling a lack of coordination in his hands.

We also meet the father-in-law, a grumpy old man, alcoholic and, as we find later, weed smoker, who goes to live temporarily with the family.

Feeling worse, medical tests confirm that the symptoms Ramón is experiencing are not caused by the stress, but by as sclerosis at an advanced stage. Firstly, he fights the idea of being sick, as he doesn’t feel so bad. Soon in the movie we watch his illness advancing, affecting the whole family and his job. He reluctantly starts the medical treatment, while his wife carries on with her pregnancy.

We meet some interesting characters, other patients in the hospital following the same treatment he does. They don’t have much screen time, but you want to know more about their lives. One predicts him, that in one year, he will be unable to walk 100 metres.

Our protagonist is left apart from his friends and we witness his arguments with his father-in-law, with whom he never got well before. It’s around then when he decides to complete an Ironman.

His wife gets him and his father-in-law together, and he starts training under his tutelage (he was physical teacher in a school for 40 years), using unorthodox methods. Close to the competition day he suffers a strong attack that leaves him in badly shape.

With the second child and his wife back at work, as he finally must quit his job, he manages to start training again. At this point, he is already in better terms with his father in law. He finally gets to know the reasons behind his behaviour, as he misses greatly his wife.

With a lot of effort, and just minutes before the deadline, with organisers already taking down the installation, he crosses the finish line among the happiness of his family waiting for him. Intercalated with the images from the movie we can also watch real footage from the real athlete finishing the Ironman.

As the credits roll out, we get to know that Ramon finished an Ironman, 4 marathons, 8 Olympic triathlons, 5 half Ironmans and 16 half marathons. He was 3 years without outbreaks, but then they came back. But the story is about a man whom they told he couldn´t.

The movie is dedicated to all patients suffering from incomprehension, work issues, lack of government subsidies, loneliness and depression.

Pros: uplifting spirit; raise awareness about the side problems that patients suffer in his everyday life, besides the ones linked to their diseases.

Cons: the father-in-law character, not very credible, and a comic-relief too intense.