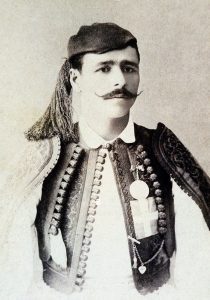 With Pierre de Coubertin leading the efforts to revive the Olympic Games, in 1894 was decided that they would take place in Greece in 1896. The marathon, although previously inexistent as an athletic race, was proposed by Michel Bréal, and introduced in the calendar as a way of remembering the legendary effort of Philippides, the Greek messenger that run from Marathon to Athens to announce the Greek victory over the Persian Empire in the battle of Marathon.

In Greece, the Coronel Papadiamantopoulos was elected responsible of the qualifying races that would decide the Greek Marathon Olympic team. He had been the commanding officer of Spyridon while doing his military service, and already knowing his running capabilities, convinced him to run on one of these trials. On the second of them he finished fifth (with the winner in 3.18), gaining him a place in the Greek Olympic team, and later in marathon history.

Spyridon came from a humble family. By the time of the Olympics he was 24, and worked in the family business carrying fresh water to Athens. On April 10, 1896, wearing shoes donated by his fellow villagers, was among the 17 runners (13 of them Greek) to start in Marathon, for a race that would take them to the Olympic Stadium, in Athens, nearly 25 miles away. The French Albin Lermusiaux, who had finished third in the 1500m, took a strong lead from start that would last well beyond the halfway point, when he let the Australian Edwin Flack, which had already won the 800 and 1500m a few days earlier, in the lead. Meanwhile, Spyridon, that had stopped in the small village of Pikermi for a refreshment (a glass of wine, or cognac, depending on the sources) predicted that he would overcome those in front of him. Flack, that was unused to run such long distances, began to slow down, and being only 2 miles away from the finish line collapsed. In a delirious state, in which he even punched a spectator who tried to help, he abandoned the race, allowing Spyridon to take a lead what would become definitive.

At the same time this was developing, the crowd in the stadium was depressed as the last news available put the Australian in the front. When a messenger brought the news that Spyridon was in the lead, the whole stadium started shouting “Hellene, Hellene”, as for Greece. The apotheosis of Spyridon entrance into the stadium got people on their feet for a last lap, stopping the clock in 2.58.50, seven minutes ahead of the next competitor. As he recalled years later everybody started calling out his name and throwing flowers. The first legend in the marathon epic was born.

Spyridon saved the Greek honor in the first modern Olympic Games, and consequently became a national hero on his own right. He was offered a wish by the King of Greece, and modestly he only chose a donkey and a carriage to help carrying water in the family business.  He retired from running immediately after the race, and went back to his simple life. Many years later he was honoured as flagbearer of the Greek team in the 1936 Berlin Olympic Games, where he presented an olive branch from Olympia, birthplace of the Olympics, to Hitler, as a symbol of peace. That would become his last public appearance before dying in 1940.

The Olympic Stadium in Athens is nowadays carrying his name, and entered the greek language, as the expression “yinomai Louis” is used to talk about “disappearing rapidly”.

Pictures in the public domain, used under Creative Commons Licence.