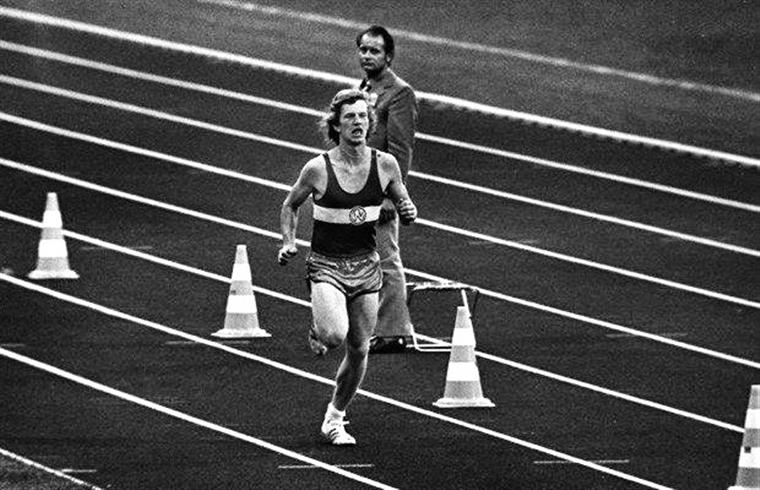 Napping in the car had done him well. Norbert feels now relaxed, and ready with his shirt and race number for the race. The numerous people on the streets, ensures an animated course through Munich city centre.

Integrated into the course, Norbert finds himself, as he was hoping, at the head of the race. His mind is a whirlwind of sensations while descending the tunnel that gives access to the Olympic stadium. The finish line of the marathon is only a short distance ahead.

Coming out of the tunnel´s darkness, and as his eyes adjust to the evening light which fills the stands with an orange hue, he hears the clamour of the crowd. They are cheering: An athlete in the German shirt is headed for victory! Inside the Olympiastadiom´s track, and not feeling any fatigue, he knows that glory is within his reach.

It is only when approaching the finish line that his most immediate pursuer, the US athlete Shorter, makes his entrance into the stadium, receiving the boo from the dedicated German public, who is clearly sweeping for home.

Thus, without even needing to sprint, Norbert crosses first the finish line. Dodging the track judges, and with no time for celebrations, he unexpectedly continues running, heading again towards the tunnel.

Running only the last kilometre of the marathon, and surprisingly deceiving public and judges, he has managed to feel the taste of victory. Nevertheless, Frank Shorter from the United States is the true winner of the 1972 Munich Olympic marathon in 2h12m19s.

However, for East German student Norbert Sudhaus, his short-lived joke has also secured him a place in the annals of Olympic history.