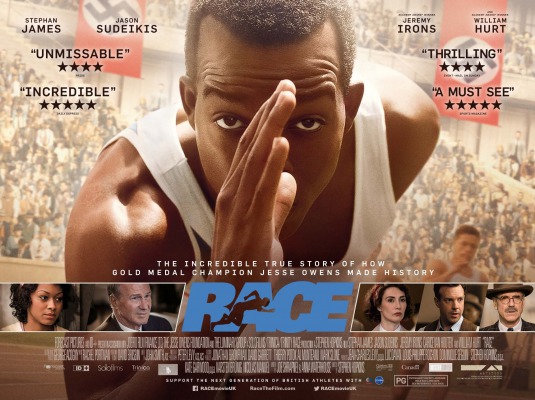 Pros: Stephan James´s acting work; filmed in location; admitting the racism present in the USA without demonizing uniquely the German side.

Cons: it could have gone beyond his Olympic days but is clearly focused on Owens´s most brilliant phase; the flirting part.

We are in front of a biopic of the famous James Cleveland Owens, best known as “Jesse” Owens, going from his early university student days in 1933 to his Olympic successes in Berlin 1936. He is interpreted by Stephan James as Owens, and Jason Sudeikis as his coach, with the participation of Jeremy Irons, Carice van Houten and William Hurt in secondary roles.

Owens is from a humble family and already has a daughter. He knows that studying may be his only chance to get a living, so he moves to Ohio State University, where soon gets under the wings of coach Larry Snyder, himself Olympic in 1924.

With 28 months to go before the Olympics we watch Owens´s life and on the background the possibility of a USA boycott on Berlin, because of its political stand on the Jewish matter. A representative of the USA Olympic Committee, Avery Brundage (Jeremy Irons), visits Berlin to get assurance from the German Committee that there will be no problems with Jewish or black people competing, while visiting the construction works on the Olympic Stadium.

Among the historical figures we have in the movie are Josef Goebbels and Leni Riefensthal on the German side. The first trying to establish the Olympics as a nazi propaganda event, and the second one, as an artist/filmmaker who wants to make the best film possible about the Olympics and its preparation.

In 1935 Owens during the Big Ten meet, wins four events in 45 minutes: the 100 yards, long jump, 200 yards and 225-yard hurdles, breaking the world record in the last three events. He appears as a clear favourite for the following year Olympics.

In a close vote at the end of 1935 the USA Olympic Committee decides to attend the Olympics. But soon before the event Owens feels pressure from the black community to resign from attending to condemn German politics. He finally decides to go anyhow and make his statement by competing. His coach, not allowed to integer the Olympic team, travels to Berlin on his own.

The last third of the movie is in Berlin, where Owens for the first time can share accommodation with their white colleagues. We don’t get to watch all qualification races, but obviously it would slow the movie pace. In the 100 metres final, he wins clearly, getting his first gold medal.

We are shown that Owens is not greeted by Hitler himself, although this scene in the movie may not be exactly true, as in real life Owens assured that he was greeted by Hitler and even had a picture showing it. Nevertheless, it wouldn´t change much Hitler´s image nowadays.

The second gold medal comes in the long jump, after a hard competition with the German Luz Long, who helps him to qualify for the final, after two null jumps. At the end Owens gets the victory after breaking the Olympic record in his third attempt, although he had ensured the gold in his second attempt. Both, Owens and Long do the honour lap together.

His third gold medal comes in the 200 metres, and that was supposed to be his last one, but two members of the 4X100 relay are Jewish, and forced out of the team by Brundage, whom Goebbels blackmails because of his previous business acquaintances. Owens enters in the team as a replacement in the first relay post, winning his 4th gold Olympic medal.

Back in the USA Owens is received by crowds in New York, but still unable to get through the main door to his own tribute, showing us that the big prevailing problems with racism back at home. He was never invited to the White House, nor his achievements get any governmental recognition.

With the film finishing we know of our other characters future. We know that Owens and his rival Long were friends until Long´s death. The consequences of his cordial attitude towards Owens cost him the life, as he was sent to the front during WWII as a punishment for his actions during the Olympics.

Coach Larry Snyder continued training in Ohio State University and was head coach of athletics in the 1960 Rome Olympics. Brundage was chosen as President of the USA Olympic Committee in 1952, a position he held for more than 20 years until his death.

A recommendable film, as there are not many historical films about athletics, and focused on one of its undoubtable legends.13