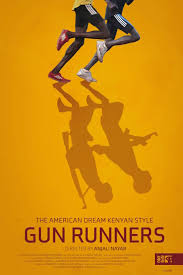 “If you lose, you must start afresh”.

The film is a documentary following Julius Arile and Robert Matanda, two Kenyan cattle farmers and warriors, that we find in 2006, when they decide to compete in the Tegla Loroupe Peace Run, an event offering rural people a chance to change life and pursue a career in sports. All we see in the documentary is from Arile and Matanda own words. They have been using weapons since childhood, as a way of defending their animals and fight against enemy tribes. In this race they can trade his weapons for amnesty and running shoes, and the possibility of taking part in a training program at Peace Camp.

Arile wins the race and joins a training program, while Matanda decides to go back to his village, although later, and convinced by Arile, he also trades his gun and try unsuccessfully to get an athletic career. Not as focused or talented as Arile, he abandons the program and get back to his village, where he can be close to his family and help with the farming duties.

As Arile keeps his training, he gets his first public appearance giving a speech in the United Nations, in New York, against illegal guns in Africa. Without any important victory, he feels pressure from his family for not being around to take care of his children (he has three wives), or his farming duties, while his economical contribution is sparse. From Peace Camp he moves to Iten, a training camp for elite Kenyan runners, including former world record holders and marathon majors winners, although competition is hard. As chief trainer Zane Branson says, only 1 of 10 will get some money from racing, and only 1 of 50 really get enough money to make a temporary living out of it.

Matanda keeps his family life, complaining about the distancing attitude of Arile with his family duties. Arile, suffering from injuries and not in the best conditions, gets his first chance of becoming an elite athlete in the 2013 Prague marathon, although being in the top 3 for a big part of the race, he only manages to finish in seventh place.

Matanda enters politics, spending his family resources in supporting a candidate who had promised him a position in the future government. Defeated, he has problems to pay his children school fees, but he manages to do so after harvesting his crops.

Meanwhile Arile gets some good positions in races, until finally is invited to run the 2013 New York marathon, a race that had been his main goal since started running. Leading the race early, he manages a meritorious fourth place, with a 25000$ cash price, and finally is received as a hero back in his village.

Before credits, we know that Matanda enrolled in college and Arile bought a farm and 20 more cows with his money prize.

Sadly, Matanda and his wife died in a car accident just shortly after filming, with his 7 children taken care by Arile´s family and the community.

Pros: understand how difficult is for African athletes to get to top level, not only because of the hard competition, but also because of his family conditions back at home.

Cons: not enough information of the chronology; that there are more than a half million illegal guns in Kenya.