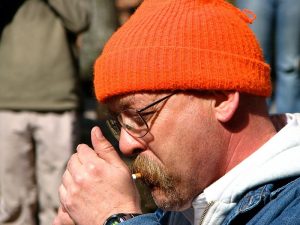 Gary “Lazarus Lake” Cantrell lights a cigarette to signal the start of the Barkley Marathons (Photo by Michael Hodge, used under a Creative Commons License)

Gary Catrell, ultra-runner and race director of the Barkley Marathon

This documentary chronicles the 2012 Barkley Marathon, a race I didn´t know about until I came across the film a couple of years ago in a streaming platform, and that I recently watched again.

The Barkley Marathon is an ultra-marathon race that takes place since 1986 in the Frozen Head State Park, in Tennessee, over a distance of 100 miles (although it is said to be closer to 130 miles, but no GPS are allowed), and a completion time limited to 60 hours. The course, that changes slightly every year, consists of 5 loops, each of them approximately 20 miles long, with 12000ft climb and descent through a dense forest, that start and end at a yellow gate.

Registration is 1.60$, a car licence plate from their town/country for first-timers, and another object (from a white shirt to a pair of socks, depending on race director necessities) for previous runners. The number of runners is limited to 40, with an obscure registration process involving some kind of motivation letter and a set of complicated rules.

Completing 3 loops achieves a “fun run”. The first 2 loops are done clockwise, and the next 2 counter-clockwise. For the 5th loop, if there is still any runner on the track, the first one can choose the direction to follow, with subsequent runners alternating directions. From more than 1000 starts over the years, the full distance have only been completed 18 times (by 15 different runners).

The film introduces us with some of the participants, as they arrive to base camp. The start is in a 12h window, from midnight to midday, and runners are only informed 1h in advance. We get the feeling of some runners and their preparations. They are not given any course map. Some books are distributed along the course, and each runner has to take the page number according with their race number in each of them, working as checking points. There is also animated and intercalated information about its origin and course, along the film, giving useful bits of information. We get also introduced to who could be defined as one of the central characters of the film, race director Gary Cantrell (aka Lazarus Lake), whose funny quotes are for me one of the highlights of the film. He probably deserves most of the credit for this race happening. We are also introduced to some of the runners, although I will make a note of the subsequent 3 finishers:

After witnessing the feat of finishing such a race, we are also given an insight with the end credits of 2013 and 2014 race results.

A funny film, where you can feel the tension, sweat, blood and every bit of effort involved. After watching the film you will only want to grab your shoes and go running crazy in the woods.

Pros: fun and close look to the ultra-running world; the race director, a true character

Cons: that some of these races may be out of bounds for mortal runners