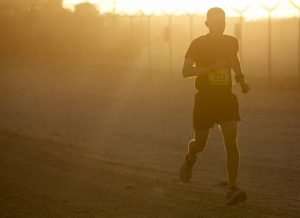 When comparing results of elite athletes competing in IAAF World Championships between 1999 and 2011 it was found that in endurance events athletes performed worse in hot conditions, above 25°C (3% deterioration), while in short duration events there was an improvement (1%). In events as 100, 200 and even 400m, heat only have a positive effect on the outcome. Longer distances, from 800m to marathon, provided worse times, with a clearer effect as the distances increased. It was noted that the optimum temperature for competitive marathon appears to be between 12 and 15°C. Not only there was a more pronounced fluid loss and electrolyte imbalance in hot conditions, but also more renal damage, haemolysis, immune activation and oxidative stress.

As endurance events were compromised by hot weather a study evaluated the effect of short (7 days or less) and medium (8-14 days) term acclimation periods. It was found that longer acclimation periods gave better performance results, achieving also higher heart rates during exercise, and lower core temperatures. Therefore it looks worthwhile to try longer adaptation periods for endurance athletes, if time is available, although this acclimatization could be counterproductive in sprinters.

For heat adaptation there can be a combination of active acclimation, through training protocols, and passive acclimatisation, by living in hot conditions. It has even been reported in some studies that training in hot conditions could be also beneficial for competition at cooler temperatures. As for the training intensity it is better to forget about heart rates and times during the first days of acclimation, as they can offer misleading results, and use the perceived exertion as index of training intensity. Living normally in a similar environment to the one that is going to be experienced during competition would consequently be an advantage. Heat acclimated individuals have also a better ability to reabsorb electrolytes and salts. It has been reported a 40% lower concentration of salts in their sweat, regardless of transpiration levels.

There have been suggested three key strategies to successfully compete in hot weather conditions:

Finally, there can be a 8°C difference between sun and shade conditions, so, if possible, do your exercise on the shadow.

Adaptation to hot environmental conditions: an exploration of the performance basis, procedures and future directions to optimise opportunities for elite athletes

Strategies for optimising marathon performance in the heat